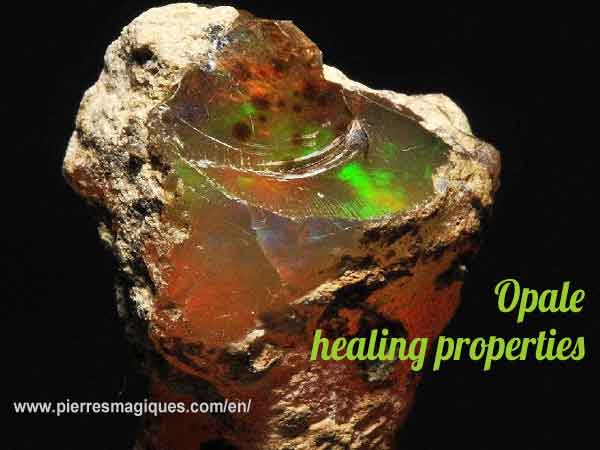 Opal is a beautiful gemstone that comes in a wide range of colors.

Opal gemstone is really the “Queen of Gems“. It has always been one of the most popular and respected gems, known to soak up, carry and pass huge amounts of energy. Opal gemstone is a very beautiful stone used as a lucky charm in certain countries.

The opal has long emerged from the slight cloud of disfavor due to a most erroneous fancy that it was in some way associated with ill-luck. This idea, possibly in its origin explainable by the comparative fragility of the gem, found a consistent and earnest opponent in the late Queen Victoria, whose influence did much to make opals fashionable.

Common opal birthstone is a dull white or milky blue color and produces the same effects but to a smaller extent due to its dullness. Opal gems should be strongly cut due to its fragility, for the finer the cut, the more the stone will deteriorate in time.

Opals foster love, passion, loyalty, faithfulness, emotional expressiveness, warmth, spontaneity and dramatic ability.
Also associated with peace, and consciousness. Sometimes considered unlucky, but this is only because modern people fear their emotional side. This is a very emotionally responsive gemstone.

Opals gemstone supposed for further improve the positive characteristics for people born under the zodiac sign of Taurus . Its leading Planet is Venus and this gemstone can open all chakras