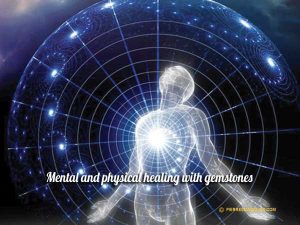 A wide range of mental and physical conditions are claimed to benefit from crystal or gem therapy.

healing properties  have been attributed to various gemstones over the years.

Types of treatment Crystals are used in various ways for treatment.

Many people also use crystals in combination with other healing methods. Wearing of jewellery Crystals or gems can be set in jewellery and kept close to the body.

A particularly popular jewellery item for many years was, for example, the signet ring.

Feng shui, the ancient Oriental art, has nine “cures”, all designed to repel, dispel or dissipate stagnant or harmful energy (or chi) – of these, crystals are probably the most popular.

Large amethyst geodes or quartz clusters are said to be effective room cleansers, while quartz obelisks are said to be potent energy enhancers that mag-netise or pull positive chi towards them.

Crystals are therefore often used in homes and offices to improve the quality of everyday life, and to absorb any bad vibrations that are caused by common pollutants and machinery (including computers).

In electrocrystal therapy, the body is initially scanned with a specially adapted video camera that relays a coloured picture of the auric field onto a computer screen.  The therapist marks those areas where the colour of the aura is inappropriate, indicating stress or dysfunction.

Electrocrystal therapy uses quartz crystals in saline solution that are enclosed in a sealed, glass electrode connected to a battery. Up to five electrodes are placed against the affected area or over a chakra point.

The crystals are electrically stimulated, which amplifies their natural healing vibrations until they vibrate and resonate at a desired frequency. This treatment is thought to bring the endogenous fields back to a harmonious state.

Crystal cards, created to be worn on the body, were developed as a result of the NASA space programme. Astro-nauts travel into space with a number of pyramid-shaped quartz crystals, electronically charged to vibrate at the frequency of the earth’s geomagnetic field, to combat the negative effects of spending time outside the earth’s magnetic field.

Electronic gem therapy blends modern technology with traditional Ayurvedic medicine by combining gemstones or crystals, coloured light and electronic amplification. Depending on the condition, patients either require cooling gems such as emerald, topaz or carnelian or warming gems such as ruby, chrysoberyl or citrine. During treatment the gemstone is electronically vibrated at a frequency set for a specific condition.

The energy from the gemstone is focused via special coloured lamps called gem transducers onto the part of the body requiring treatment. It is believed the treatment provides additional energy needed to bring about self-healing.

The seven chakras are assigned different gemstones corresponding to their vibratory rates.

Gemstone essences are bottled essences of gemstones that are made by immersing the stones in pure water and leaving them in natural sunlight.  The sun’s energy percolates through the stones into the water taking the gem’s vibrations with it (transferring their “vibratory signature” into the water).

It is believed that they are more effective when taken in a relaxed state and at least half an hour before or after eating.
Normally seven drops are taken three times a day under the tongue, but it can also be dissolved and sipped slowly, placed on a meridian, added to bath- water or massage oil, or sprayed around the body.

Meditating with a crystal Crystals of the quartz family, such as clear quartz, amethyst and rose quartz, are the crystals used most frequently in healing.
Amethyst is the “stone of meditation”, creating a state of enhanced spirituality and contentment.
Clear quartz represents the clarity of mind that people hope to achieve through meditation.

Maintaining a focus on a crystal helps quiet thoughts during meditation. The crystal is held or placed in front of the person on the floor or on a small table. Some people use three similar crystals and position them in an equilateral triangle, forming a charged energy field in which to sit.