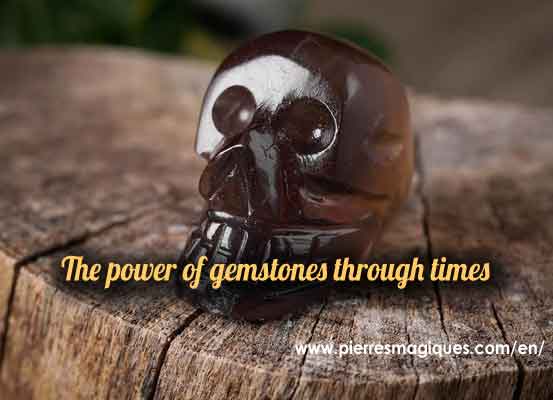 Precious gemstones & crystals have always exercised a magical influence over humanity including Kings & Queens, Smugglers, etc.  all have been lured & seduced by the beauty of gemstones.

Since the beginning of time, crystals, gemstones, rocks & mountains have played a vital role.

Many have been found in ancient ruins & Pharaoh Tombs & it is said that the lost city of Atlantis used crystal power the same way we use electricity today.

Hindu Puranas describe Krishna as living in a city furnished with rubies, emeralds, sapphires & diamonds.
Many cultures believed that stones had a life giving force & this eventually led to them being used for healing.
Stones have also played a key roll in various religions.

Islam says that the stones spoke to Mohammed and informed him that he was to receive the Quran from Allah.
One of the five pillars of Islam says that every Muslim should try to visit Mecca and the Kaaba which is a huge black stone.
Moses received the Ten Commandments on tablets of stone which are believed to have been sapphires.

In the book of Revelations describes Jerusalem as ‘the foundations of the wall of the city were garnished with all manner of precious stones. The first foundation was jasper, the second sapphire, the third chalcedony, the fourth an emerald, the fifth sardonyx, the sixth sardius, the seventh chrysolite, the eight beryl, the ninth topaz, the tenth chrysoprase, the eleventh a jacynth and the twelfth an emethyst.

The Egyptians engraved an eye on lapis lazuli as it symbolised Ra, the Sun God.

The Babylonians & Norseman engraved magical symbols on to stones & used them as Rune oracles, something which is still used today as a means of divination.

One of the prayers taught to Bulgarians is ‘The Disciple must have a heart as pure as a crystal.
A mind as bright as the sun.
A soul as vast as the Universe and a spirit as powerful as God and one with God.

Ancient priests believed crystals to be a God given force that defied all evil.

Aboriginals still use crystals for medicine and value the Rainbow crystals in particular as these hold the energies of the Rainbow Serpent & the Rainbow symbolises the bridge between the two worlds.

They also believe that a crystal that finds its way to you, that you haven’t bought, has been growing itself since the beginning of time especially for you and should therefore be especially valued.

Cherokee Indians consider crystal to be the most sacred & precious stone for healing purposes.

They also still revere their crystal skulls which were also used by the Mayans, Aztecs, Egyptians, Tibetans, etc.

They were placed on altars and the word of God was believed to be spoken by them.

Many psychics consider these ancient crystal skulls as memory banks of information, much like we store information on computers today.